The first of six trains with one crew member is set to roll in revenue service this Sunday, opening a new chapter in the history of public transit in Toronto. 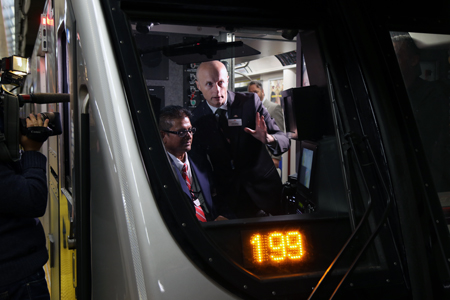 The first of six trains with one crew member is set to roll in revenue service this Sunday, opening a new chapter in the history of public transit in Toronto.

One-Person Train Operation (OPTO) will officially begin on Line 4 Sheppard with the October Board Period on Oct. 9. With OPTO technology, Subway Operators will drive the train and operate its doors from the lead cab. A Subway Guard will no longer be onboard.

Operator cabs on specially equipped four-car trains include both left- and right-side door control buttons, multi-view cameras and in-cab monitors so Operators can activate the doors while seated at all times.

“This is a significant day in the TTC’s history because it marks a further transitional point on our modernization road map to becoming a system that makes Toronto proud,” said CEO Andy Byford at a media briefing at Don Mills Stations on Oct. 3.

“Modernization is way more than modernizing infrastructure, such as new trains, new streetcars and new signalling. It's about modernizing work practices, our systems and the prevailing culture of the TTC.”

OPTO is being introduced sequentially with a new stations management model as prescribed in the Five-Year Corporate Plan.

“Yes, there will be only one person on the train, but the Operator will be assisted by a much greater stations presence. As PRESTO rolls out over the next several months, Collectors will be liberated from their booths and they will work in and around their stations as Customer Service Agents.”

The introduction of OPTO underwent a stringent peer review by American Public Transportation Association and the Ontario Ministry of Labour, both endorsing that no additional risk exists to safe operations.

Correct-side door technology will design out the likelihood of the doors opening on the wrong side of the platform. The new technology also prevents doors from opening off-platform, explained Acting Chief Operating Officer Mike Palmer.

“We took four, six-car trains and made six, four-car trains equipped with OPTO technology,” he said. “The two main features are door buttons on each side of the console and CCTV monitors that show the platform – two cameras in the train and three on each platform.”

Byford added that 2017 will be a defining year for the TTC. Full PRESTO implementation in mid-year, a new signalling system begins to go live between Dupont and Yorkdale Stations by the fall and the Spadina Subway Extension will open by year’s end. “It’s all coming together,” he said.