It was dubbed “S” Day. On March 30, 1954, the TTC opened a new era in transportation for the nation with the operation of Canada’s First Subway. The 7.4-km Yonge Subway stretched from Eglinton to Union. The Yonge line was the first post-war subway to be built in North America, and this month it celebrates its 60th anniversary.

It was dubbed “S” Day. On March 30, 1954, the TTC opened a new era in transportation for the nation with the operation of Canada’s First Subway. The 7.4-km Yonge Subway stretched from Eglinton to Union. The Yonge line was the first post-war subway to be built in North America, and this month it celebrates its 60th anniversary.

On September 8, 1949: Construction began on the Yonge project, a 4.6-mile subway running under Yonge Street from Front Street to Eglinton Avenue. Construction comprised of 3.2 miles of cut-and-cover and 1.4 miles of open cut.

Canada’s first two of 140 subway cars (Gloucester-built 5000 and 5001) arrived in Montreal from England in July 1953. The cars were transshipped to Toronto by rail. The TTC initially ordered 104 cars at a cost of $11.5 million. That year the CNE included a popular TTC exhibit, which featured the G-cars at a mock-up station. The last of the red G-cars was retired from service in 1990. 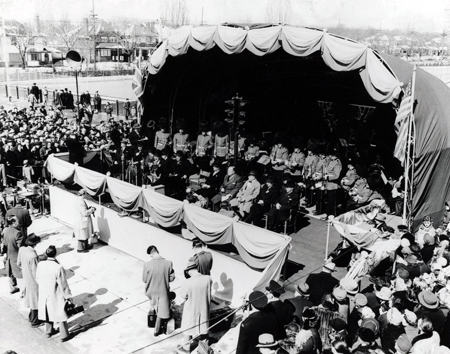 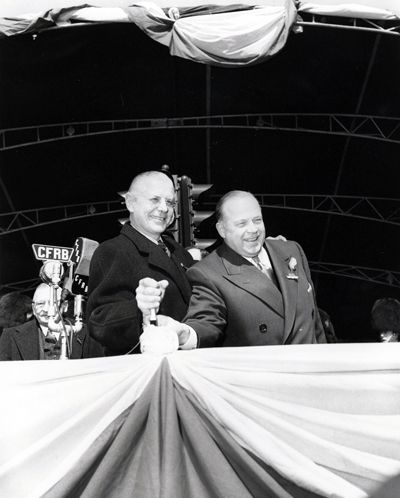 On March 30, 1954: Canada’s First Subway opened for business from Eglinton Station to Union Station. The subway was built at a cost of $67 million – including subway cars. Opening ceremonies began at 10 a.m. The line opened to the public at 1:30 p.m. Ontario Premier Leslie Frost and Toronto Mayor Allan Lamport officially started subway service with the pull of a switch.

Recently, you asked for stories regarding the subway opening. Well, in early March 1954, we left England to immigrate to western Canada. We were told not to go to Toronto, as there would be no work. Instead, we went out west to Calgary.

After a long cold trip across the Atlantic, seeing icebergs and snow, I began to doubt my desire to travel. Then, after a long four-day trip from St. John, New Brunswick to Calgary Alberta, we arrived in a cold city so bright with sunshine; I had to buy extra strong sunglasses. After finding the immigration office, we were asked why on earth we would come here. There are thousands unemployed, and no sign of spring for a couple of months.

Renting a room made our money run out fast. I decided we had to either go to B.C., or back east, so the choice was Toronto. We saw an ad for construction workers in Toronto to build the “Golden Mile Plaza” (my husband was in construction). We took a bus all the way across the U.S. to Toronto, arriving on the 29th of March 1954. We walked up Bay Street in the snow, in my little blue patent leather sandals and my thin spring coat, dragging my suitcase, and with tears streaming down my face. I wondered what I had come to. I had left a comfortable home and family, thinking I would travel the world. We had left our big luggage at Union Station while we looked for a place to stay. The “Travellers Aid” told us to go to this address on Huron Street, showed us where it was, told us to go up Yonge Street, but did not tell us we had to keep the transfers, causing us to keep paying the ticket. Then I saw the sign for the subway. I ran down the stairs eagerly, but it was all barred up. A man then told me, “It doesn’t open till tomorrow.”

After many hard times, that would make a great book, and nine years later, I arrived back in Canada and found myself at the Head Office at Davisville. I thought I would go in and apply for a job. I had been with Bell Telephone too that day. Anyhow, I met Joyce Batman, who had just been on a trip to England, and she was very nice to me. She took me down to the Treasury Department and they offered me a job. Bell also phoned that evening to offer me a job, but I chose the TTC. That was Feb. 15, 1963, the day I started. I worked in Treasury until I transferred to the Planning Department of Gray Coach Lines, which was a great place to work. It was like a family. We had so much fun even though we worked hard. We then went downtown for a few years, then were sold and split up. Some went back to Head Office. Others were sent to various departments throughout the Commission. I ended up in Corporate Planning. I had met my second husband at a TTC retirement party and he had been employed since he was 16. We had a great life of 37 years together until he passed away in 2007. He retired after 42 years in Legal and Claims. I retired after 27 years. It is a family thing. My daughter is also employed at the TTC in the Payroll Section of the Finance Department. I never thought that 60 years after the first subway opened that it would mean so much to our family.

We all still use the subway all the time and I love the new trains, they are so sleek. I hope to ride it for a few more years. Thanks for the memories.

A bit of history saved 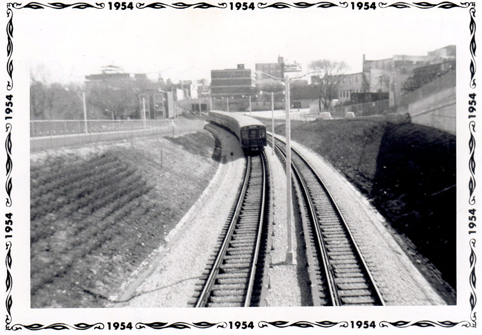 Attached is a picture taken on opening day, March 30, 1954. It’s a northbound train and was taken from Aylmer Avenue looking south towards Bloor Street. I took the photo on Aylmer, on the bridge over the subway right-of-way. The camera used was a Kodak Brownie. Not very sharp, but a bit of history saved.

I have had an interest in transit for as long as I can remember. Probably stems from the fact that the “Dupont” car used to shake, rattle and roll past the house that I lived in on Dupont and Howland Avenue. When the subway opened on March 30, 1954, it was a “must-be-there” event that I had to do! I went with my father and sister to Rosedale Station, boarded the train and rode the line several times. I do, however, regret not riding the Witt trains on Yonge on the last day. Eleven years after taking pictures of the Yonge Subway I started working at the TTC in the Overhead Section.

Retired now, for many years, I still have transit in the blood and follow with interest the ongoing transit projects in North America.

I was stationed at Dundas

A few weeks prior to the opening of the Yong Subway on March 30, 1954, I was one of a group of young men hired to clean up the stations in preparation for the “great day.”

On opening day all rides were free and I got my first look at major crowding on the platforms. I was stationed at Dundas on the west side that day and miraculously no one fell or got injured. Torontonians were immensely proud of Canada’s First Subway, and Alan Lamport was the Mayor.

A few weeks after I was trained as an Operator. The pay was $1.32 an hour, the most money I had ever seen. I stayed with the TTC for another 34 years and retired on March 30, 1988 as a Supervisor in the subway.

My first memory of the Yonge Subway goes back to 1954 when our public school teacher took our Grade 7 class to Toronto to ride on the new subway.

We were from a public school in the small town of Ridgeway in the Niagara Peninsula, and it was a big deal to go all the way to Toronto.

The most memorable part of the ride for me was when the Conductor came up to our teacher and asked us to get off the subway, as it was now rush hour, and we had been riding for a long time, and were taking up all the space, which was needed for the regular commuters. As young teenagers we were particularly embarrassed, so that memory stayed with me.

Best wishes to the TTC for lots more great years.

Memories of subway and streetcar

I remember as a kid riding the Yonge Subway route back in the 50s. But my most-fondest memories as a kid was riding on the Old Weston Road trolley. I remember riding on it in the winter time as it was as cold as hell, and at the end of the line, the Operator or Conductor would go to the back of the car, crank the black handle and start the trolley heading in reverse to where we had just come from.

They were fun rides if you could hack to cold and I believe it had an old pot-belly stove onboard.