75 years ago (Sept. 23, 1938), the TTC cut the ribbon at an inauguration ceremony placing the new “Streamliners” in service on the St. Clair streetcar route. This modern type of streetcar was ordered from the Canadian Car & Foundry Company and delivery began a month earlier. These cars were the result of exhaustive experimentation by a special research staff of the American Transit Association. About a thousand of these cars were ordered by various transit organizations on this continent, but Toronto was the first Canadian city to be served by them. “With the purchase of 140 new streamlined streetcars now being received, we are but continuing our policy of providing the public with the best service within our power,” The Coupler reported in 1938.

It was there that America’s first electric car was displayed 55 years ago.

The new cars are the result of years of research and exhaustive testing of preliminary models. In actual operation they have proved their performance and their rider-appeal has been attested by the greatly increased passenger traffic they have won. Our passengers will have a new experience when they ride on the streamlined cars.

THEY’RE SWIFT. The acceleration, the pick-up, is surprisingly fast. The four motors supplying 220 horsepower move the new car from a standing position with surprising swiftness. The free-running speed will keep the car in place under any traffic conditions.

THEY’RE SAFE. Three braking systems combine automatically to keep the car under masterful control in any weather. A dynamic brake, a track brake, which grips the rail with a pressure of twenty-six tons, and finally an air brake slows the car to a cushioned stop.

THEY’RE SMOOTH. The new 99-notch accelerator, the combined three braking systems and a car literally floating on rubber result in a smooth, gliding ride, which must be experienced to be appreciated. Air-conditioning, thermostatically controlled electric heating, no-glare, no-shadow illumination, in fact the whole interior design and equipment produce results in passenger comfort that equal and in some respects excel limousine luxury.

THEY’RE SILENT. Rubber, the modern deadener of sound, has been used in abundance. The wheels cushioned with rubber and rubber mountings reduce noise and vibration to practically zero. The new hypoid driving gears work silently in oil. The close attention devoted to noise reduction has resulted in an amazingly restful and silent ride. 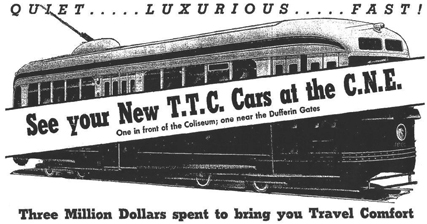