Travel time for many transit riders in Metropolitan Toronto was cut in half when the city’s new Bloor-Danforth Subway opened at 6 a.m. Saturday, February 26th. 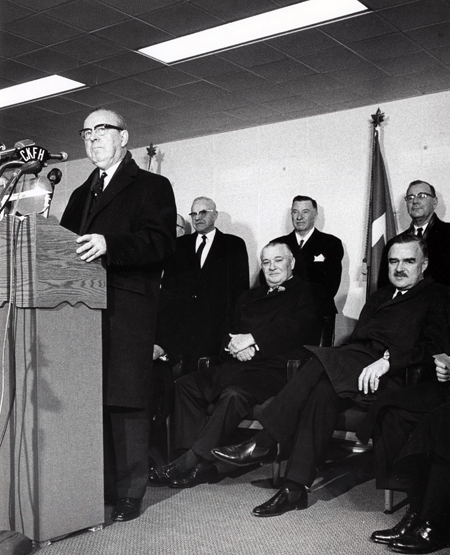 Prime Minister Lester B. Pearson at Yonge Station to officially open the Bloor-Danforth Subway on Feb. 25, 1966.

Travel time for many transit riders in Metropolitan Toronto was cut in half when the city’s new Bloor-Danforth Subway opened at 6 a.m. Saturday, February 26th.

Formal ceremonies marking the opening of the new eight-mile crosstown line – the final stage of the $200-million Bloor-Danforth-University subway project – were held at 2 p.m. Friday, February 25th by the Rt. Hon. L. B. Pearson, P.C., M.P., Prime Minister of Canada; and by the Hon. John P. Robarts, Prime Minister of Ontario.

With its opening, the TTC has 15 miles (24.1 kilometres) of subway in service. The new line extends along Bloor Street and Danforth Avenue – the city’s principal east-west traffic artery – from Keele Street to Woodbine Avenue.

Co-incident with the subway extension, streetcars were removed from Bloor Street and Danforth Avenue, between Keele and Woodbine. Several other major thoroughfares were involved too, thus increasing the capacities of these streets at no expense to the community or to motorists.

As proved along the Yonge subway route, the new subway is expected to improve real estate values and accelerate business development; soon to become apparent in substantially increased business and property assessments. Evidence of this is already indicated by high-rise apartment buildings now under construction near Broadview and Keele Stations.

The need for an east-west subway route was apparent many years before its construction. In rush hour, the Bloor streetcars were at full capacity, carrying approximately 9,000 passengers per hour. With subway operation, this capacity is increased to 40,000 per hour each way.

In 1956, in response to urging by the TTC for an east-west subway, Metropolitan Toronto Council authorized the preparation of functional plans and estimates. These were presented to Council in January 1958. The plans encompassed a subway beneath or parallel to Bloor Street and Danforth Avenue, from Keele Street to Woodbine Avenue. Further, it called for an extension of the Yonge subway up University Avenue to Bloor Street to provide additional capacity into the downtown area and the whole central business district.

The Ontario Municipal Board approved the project in September 1958. In April 1959, Metropolitan Council approved financing arrangements for the $200 million subway, thus giving the green light to the biggest, most important public transit project ever tackled in Metropolitan Toronto.

Preliminary work on the relocation of utilities was started within a few weeks. On November 16th 1959, the then Premier of Ontario, Leslie M. Frost, operated a power shovel to signal the official start of construction for the two-mile University line. It was completed and officially opened by Lt. Governor J. Keiller Mackay and the Premier of Ontario, John P. Robarts, on February 28th, 1963.

Originally, because of financial considerations, the Bloor-Danforth-University subway was to be built and opened for service in three separate stages; 1) the University section, 2) the east leg from St George Station to Woodbine, and 3) the west section from St George to Keele Station. Final completion was scheduled for 1969. The Province of Ontario, however, advanced a $60-million loan, which made it possible to build stages 2 and 3 concurrently.

Initially, the cost of the entire $200-million project, with the exception of right-of-way, was to be shared equally by Metropolitan Toronto and the Toronto Transit Commission. The Metropolitan Corporation purchased and retained ownership of the right-of-way. It expects to recover much of the land costs through the lease of air rights over the subway.

An important change in the cost-sharing formula was approved in 1964. Under the new arrangement, Metropolitan Toronto assumed responsibility for right-of-way construction costs and the TTC became responsible for operating equipment costs.

On the Bloor-Danforth-University subway project, this cost division approximates 70 per cent of the cost to Metro and 33 per cent to the TTC. This formula was also applied to the remaining debt on the Yonge Subway.

The Ontario Government recognized the unusually heavy burden of the subway construction program and under The Highway Improvement Act, 1963, began paying one-third of certain right-of-way construction costs for work done after April 1, 1964. On the Keele-to-Woodbine section of the subway, this share will amount to $12 million.

Assistance was also given by the Federal Government under the Municipal Development and Loan Act, 1963. Loans totalling $29,482,000 were arranged under this Act. These loans were subject to certain “forgiveness” provisions for work completed prior to March 31, 1966, and the amount of the loan forgiven amounted to $7,370,500.