Sunday, September 30, was a historic day for Toronto. The new Canadian Light Rail Vehicle (CLRV) was introduced in revenue service on our Long Branch streetcar line. 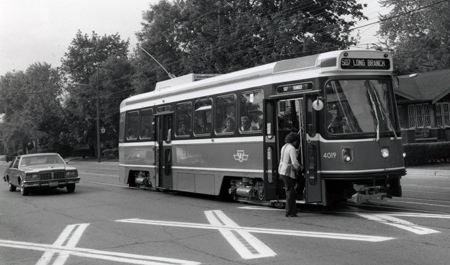 Sept. 30, 1979: Passengers board one of the eight CLRVs in service on the Long Branch route.

Sunday, September 30, was a historic day for Toronto. The new Canadian Light Rail Vehicle (CLRV) was introduced in revenue service on our Long Branch streetcar line.

To mark the occasion, a special inauguration ceremony was held at Roncesvalles Division on Saturday, September 29. Hundreds of TTC employees and Torontonians turned out to view and ride the first “new look” streetcars to serve transit riders since the debut of the PCC car in 1938.

Speakers included the Hon. James W. Snow, Minister of Transportation and Communications, Ontario; Paul V. Godfrey, Chairman, Municipality of Metropolitan Toronto and TTC Commissioner; TTC Chairman Julian Porter; our Chief General Manager R. Michael Warren; and Kirk L. Foley, President, UTDC. Three generations of streetcars – a Peter Witt, a PCC and a CLRV – formed the backdrop for the ceremony at Roncesvalles. A brief ceremony also was held at Humber Loop. The CLRVs were enthusiastically received by first-day riders who were obviously impressed, and pleased, with the CLRV design and operating characteristics.

L.W. Bardsley
The TTC’s man behind the CLRV

The TTC’s man behind the development of the CLRV, Len Bardsley, is our Manager of Equipment Department. On loan to UDTC (Urban Transportation Development Corporation) as Program Manager, he was a driving force throughout these long, arduous years during design of the new streetcar. UTDC also requested the services of Ray Corley as General Engineer of the project. Ray is currently Superintendent of Design and Development in Equipment.

Subsequently, Messrs. Bardsley and Corley played a prominent role, not only in determining the design criteria, and specifications for a new and entirely different configuration to any previous streetcar, but during the exhaustive tests that followed after six prototype vehicles were delivered to the TTC by the Swiss Industrial Company (SIG). UTDC then contracted with Hawker Siddeley Canada Limited for the production of 190 more CLRVs to the SIG design. UTDC, as part of their project, separately procured the vehicular sub-systems such as propulsion, brakes, door controls, heating, ventilation, and couplers, etc.