On the rocket in summer of ’96 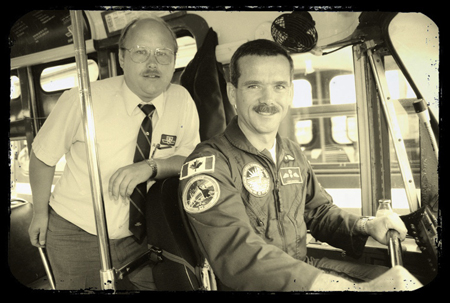 Hadfield was the first Canadian to command the International Space Station where he spent five months as a crew member of Expedition 34/35. He shared his experiences and experiments with the world by taking more than 45,000 photos, tweeting to a million followers and making a music video from space (a reprise of David Bowie’s Space Oddity).

Hadfield is now looking for a new challenge.

“We think we’ve got one for him,” joked CEO Andy Byford, “Any time he’s willing to take command of one of our new red rockets, we will be more than willing to oblige. It’s an open invitation!”

Back in 1996, less than a year after his mission aboard the Space Shuttle Atlantis where he became the first Canadian to operate the Canadarm in orbit, Hadfield climbed aboard a PCC streetcar with Russell Operator Frank Hood who whisked him to opening day of the CNE.