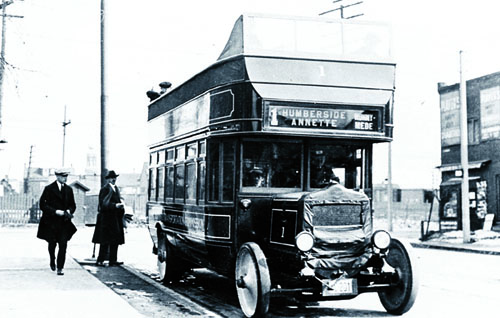 Ninety three years ago on Sept. 20, Toronto’s first bus route was introduced. In 1921, The Toronto Transportation Commission’s 1 Humberside-Annette service began service between Dundas Street and Runnymede Road, via Humberside and High Park Avenues and Annette Street. The route was served by four double-decker, solid-tire motor buses purchased from a New York City transit operator and bus manufacturer. After it was retired in the 1930s, bus number 1 was kept by the TTC as part of our historical collection. It was eventually donated to the Canada Science and Technology Museum in Ottawa, where it remains today.

On Sept. 1, 1921, the Toronto Transportation Commission (renamed Toronto Transit Commission in 1954) began serving the citizens of a rapidly growing Toronto. The TTC took over a mix of private and municipal street railways comprising the central system of the Toronto Railway Company, the Toronto Civic Railways’ five municipal routes and three routes of the Toronto & York Radial Railway within the city. Adult fares were set at seven cents and tickets were four for 25 cents.